Barely 12 hours after my delayed luggage returned from Finland I found myself back at the airport on the way for the European SkyRunning Championships in the Dolomites, Italy. I'm living the dream at the minute!

There were two races on the menu - the vertical km on Friday and the sky race on Sunday and as always, both pushing my physical limits. Sadly, I wasn't on great form and struggled in the vertical km (my preferred discipline) and never really felt like I was 'racing' the sky race. But the mountains are a great place for thinking everything through and putting things in perspective. I was able to look back at my season so far with ticks against all my ambitious goals, hardly able to recall a race that I haven't been happy with. But that never lasts and thankfully I was in a beautiful part of the world taking part in races that should be on every runners to-do list and I was able to enjoy the whole adventure all the same.

The only way to do the races justice is to include lots of photos so here is a large selection mainly from Ian Corless (Talk Ultra - see website for more photos, race reports and interviews).

Up through the forest, to the gap between the rocks and on up the slope to the left

The girls' start. I didn't stay at the front for long!

On the way up

At the gap between the rocks - don't get fooled by the arch, it's not the finish yet!

On the final few metres

The cross at the top of the hill, just after the finish

Enjoying the view with team-mate Florian afterwards - it was worth it!


The start was in the town of Canazei

From here, the steep bit 'began' up through the gap in the skyline to the Forcella Pordoi

Scree Zigzags up to the Forcella

There was still a lot of snow in the gap so they built a tunnel. A photo from our reccie the day before. 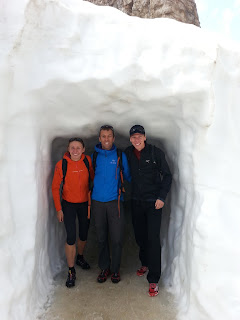 With very little oxygen, it was a case of getting through the snow and rock up to the summit

My Arc'teryx team-mate Nicola Golinelli on the more technical section

And then the summit

It was a bit snowy on the way down - I opted to slide a lot of it, Kilian fared slightly better 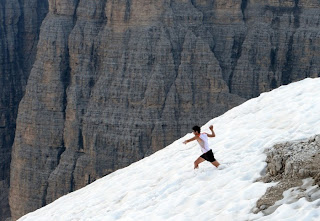 It then got rocky (and steep)

Before finishing back in Canazei.
Nice work Team Arc'teryx - thank you so much for the chance to do this. Fantastic. 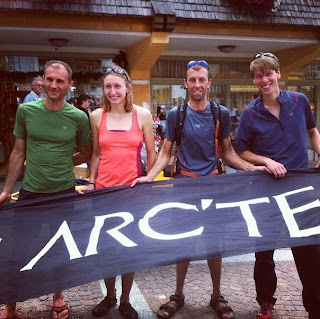 I just sort of knew it. Or was it just that I was hoping so much that I believed it? I'd set my aim of a podium at WOC this year knowing it was ambitious but I just had this feeling it would all go to plan. Well, it didn't quite do that - but the end result was just what I had dreamed of.

It's impossible to talk about my race without mentioning the previous 2 days although I actually don't think it made a difference by the time the final came. 36 hours previously I came down with a really sudden stomach bug and spent the night emptying everything I had inside me. Sunday was spent catching up on sleep and trying to get back the food and water I'd lost. By that evening I had had a few sandwiches and plain rice and I was feeling much better.

Weirdly I wasn't too fussed by it all. Or maybe I was too whacked to be fussed. All I knew was that I needed to be on that startline in Sotkamo. I couldn't leave Finland without finding out what I could have done.


By Monday I was feeling ok. The qualifier in the morning was a struggle but I got round safely. A lot of the top girls were also taking it steady and as the course criss-crossed the area, I saw a number of them and I could use their pace for a sensible guide. It all passed without too much fuss (well except for muppet Murray running off the map and scraping through to the final in the end).


I was feeling better by the hour - who else was doing that I thought!? Honestly, by the time I was on the startline, I was fine. I had plenty of energy to get me through 15 minutes. I was excited, I was ready. Bring it on.

The course itself was excellent. What had looked like a dull area for sprint orienteering had been modified with over 50 artificial uncrossable fences making every leg a tricky decision. I felt like I got into a good zone of planning ahead enough but still keeping concentration on where I was. I did 2 small errors that I can think of, one large hesitation as I got that planning ahead balance wrong (control 3) and another time I ran into the wrong garage area but quickly realised (on the way to control 9). I think I picked a very good route on the long leg (control 17) which brought me up into the podium places but did lose a few seconds in the final short controls, either on fitness, control flow or not quite finding a fence gap at the end.

It was a nervous wait as people came in. When it was confirmed as 5th I completely broke down. I knew I would do it. It was more than just hoping. But still to actually do it was just fantastic.

The team effort was just amazing - Scott Fraser achieving one of Britain's best ever results with a silver medal brought more tears to everybody's eyes. Murray improving yet again with a seriously impressive 9th. Kris Jones' debut result of 16th shows just how much more our British team has in the tank too and Sarah Rollins' 20th was equally impressive after a tough few days. Watching the union jack go up for Scott on the podium was wonderful and has set the tone for a great week here in Vuokatti.

As with any result, there are a lot more people than just the athlete that have made the result happen. I won't make a list here - I hope to thank you all personally. But also thank you to everybody who has contacted me. I'm still smiling and it's going to last a while.

Vertical km courses never look sensible. However, that didn't seem to stop over 400 runners taking on the course at Chamonix, which was the warm up to the Mont Blanc marathon weekend.

The place was absolutely buzzing. There were 5 races going on during the weekend: 80km, Vertical KM, 20k, 10km and marathon and many runners were doing a few of them. It was great to see so many people taking on such tough tests (it wasn't just the Vertical KM that included some silly gradients).

The Vertical KM started at 4pm but because of the narrow track people were set off at 30 second intervals. This meant I started closer to 7pm. I warmed up by running the few kilometres from our chalet to the centre of town alongside some guys finishing the 80km who had started over 12 hours previously at 4am. As they ran past everyone on the street and in their restaurants would stop to clap and cheer them on. Fantastic atmosphere and I hadn't even started.

I didn't have any complicated tactics ahead of the race but I knew I wanted to start aggressively. I thought it should be possible to run the majority of the course because the zigzagged path made the gradient slightly easier than usual. I knew I would hit some rocks at about 7-800m and I was nervous about that.

I set off from the main square to great cheers up a short steep road section out of Chamonix. I tried to imagine I was in a mass start and so I ran quite hard. I got past the ski lift and started the zigzags but I still felt fine so I decided to crack on. After about 200m of climb I was at 8mins something. I knew that running at 4min/100m climb is at the upper end for me so this was a good start.

I decided to chill out mentally and just 'get though' another couple of hundred metres of climb rather than continuing to push at the limit. This was mostly about getting into a nice rhythm physically but also about switching off from all the supporters that were still lining the course. I usually like to acknowledge people who cheer me but there was one at every bend. And there were many bends.

I got into a nice rhythm and felt good. I looked at my watch every hundred metres of climb and I knew I had slowed a little but it wasn't on the dreaded downward trend. I vaguely remember hitting 600m at 27mins something and 700m at 31mins, so pretty positive. It was about here that the course started to get tougher - bit stonier underfoot, some scree slopes off the sides and some bigger steps up that needed some more quad power. This disrupted my rhythm a lot and I really noticed how any big push up a rocky step would tip my lactic level over into ouch territory.

And then the real stuff - the ropes, the metal steps. The race info had warned people like myself who are scared of heights that this section of the course would not be suitable for us. Mind over matter, just keep going up. I kept my head close to the rocks and focussed on the next step, the next groove for my hand to grab, the next ledge that I could fit my foot on. I don't think it was ever that bad, but I never looked to find out!

I could see Anna Frost ahead and I knew I was closing in. I passed Ian Corless (@talkultra) and got some good encouragement. Nearly there, 900m sign passed. The terrain changed totally and I went up through the ski lifts, up some steps and then onto a gentle gradient. I caught Anna and she kindly shouted some directions at me. Now it was time to accelerate...nope not a chance. How such a gentle gradient could be so cruel I don't know but it was a tough push to the line.

I had to wait a short while for all the girls to finish and to confirm that I had taken 5th place. I was so happy with that as it was a really strong field. I attacked the race much more than I have done in previous vertical kms so experience is definitely paying off. I had the most enormous grin on my face for the rest of the afternoon, including the prize giving. I was also really excited to find out that I'm currently in 2nd place in the overall standings in the Skyrunning world series and Arc'teryx are also 2nd in the teams after a great day for the boys on Friday.