8 races, 7 days, 5 flights, 3 countries - the last ever Nordic Orienteering Tour is over but it was a bit more of a rollercoaster ride than I had intended it to be.

Friday
I woke up on Friday morning, bag packed, ready to do a morning's work and then catch an afternoon flight to Oslo. I stumbled out of the door for a very short morning jog... but I couldn't. I physically couldn't run. It was all a bit odd - it felt like a pulled muscle in my groin and no amount of brain signals would make it move fast enough to run. A bit bizarre but it was almost identical to a problem I had last spring. I would try to run but within a few steps I would be in a heap on the floor after seemingly no response from my leg.

Saturday - Sprint, Norway
Well, there wasn't much I could do about it so I got on with the day and prepared for the race as usual just hoping things would loosen off. They did a bit - I was able to jog on the race morning but the real problem was accelerating after stopping. Not ideal but manageable.

The race itself was fun, a nice mixture of testing route choice and some almost British-style tightly packed houses. I'm not going to lie, my leg did affect me during the race but I ran a pretty decent technical race and finished in my favourite world cup position of 14th. (results, GPS)

The highlight of the day was seeing teammate Chris Smithard take 4th place much to the surprise of the other nations. Chris may not have had the international results to predict this but he was the 2012 British sprint champion and silver medallist this year and as we are showing more and more regularly, we Brits can sprint! I think this was a really important day for British Orienteering as we are now nearly 2 years away from WOC2015 in Scotland. I hope it can encourage others to put in as much hard work, make the sacrifices and run confidently in an international race like Chris did.

Sunday- Middle, Norway
But onto the next day - the middle distance planned by my former housemate Kine Hallan Steiwer. My leg hadn't enjoyed the previous day's efforts and I was really unsure about whether to run. I decided to go ahead because of the silly rule that you can't run the next races unless you start the previous one. Unsurprisingly, the race was a shambles. I started off ok as I focussed on the map but after a few rocky descents that I struggled with I got very angry and hopelessly lost. I finished the race so that I was still in overall standings for the week, but I was so far off the pace that I may as well have been disqualified. I was really annoyed. I don't like to race with an excuse not only because I think it is silly but because it invariably ends badly for me. Even given the fact that I was a bit lopsided, I could have done a much better race and I am very angry that I didn't get on and do that. (results, GPS)

Monday
I woke up to bright Swedish sunshine on Monday and thankfully a day off racing. I was very lucky that my teammate Sarah Rollins is a sports medicine doctor and she spent a lot of the morning sorting out my injury. I'm not exactly clear why I got such a sudden acute problem but it is clear that my bum muscles are very weak and that is making the other stabilising muscles work far too hard. I did some exercises and had some pillow-biting massage and things were really improving.

Tuesday - Sprint, Sweden
Knock out sprint day! A day I'd been looking forward to for quite a while. I'd never qualified for a knock out round before and I was confident that I could do so this year. After that, I really wanted to see whether my new speed would hold up against the others.

I started qualification a bit nervy and it took me a few controls to get into it and settle down. It was a 'long' sprint race - a few minutes more than usual and I certainly noticed these. I didn't make any major errors, possibly a small route choice or two and I hoped that would be comfortably through to the final - I was correct - 14th again! The best thing was that my leg felt entirely normal again. Bizarre last few days but now it's gone I'm not complaining, just doing lots of glut exercises.

I was so excited about the semi-final but also pretty unsure about how to play it. 8 girls, one course probably with some butterflies, top 2 to go through and spots for fastest losers across the 3 semis. I looked across the startline proud to be among 2 Swedes, 2 Russians, a Dane, a Finn and me. I really only had one tactic - run like each control was the last and see how long you hang on for. There was no point pacing it - once you were dropped you were gone.

Bang, off we go. Elbows out, tight corner, look at map, punch up at first control with only two emit - eeek, I'm at the back. Thankfully the second control was up a hill and I could get past the pack without having to fully sprint and ruin the race. I knew I needed to be higher up the pack as the butterfly started as I needed to be with a group to get through it quickly. Thankfully Tove (Alexandersson) and Lina (Strand) set off on my variant and with Tatianya (Ryabkina) breathing down my neck. I confess there was not much map reading going on for me in this section. I was checking the direction but was trusting the girls in front. This worked out brilliantly and we came out through the butterfly meeting up with Emma (Klingenberg) at the 7th control.


Now for the street part. I realised immediately that I was loosing a few metres to Tove and Emma. Tatianya moved past me with such ease that I knew I couldn't keep up. There was still a battle to be had with Lina. I did a mixture of planning ahead and vaguely keeping track. This worked really well and a few small errors from Tove and Emma kept them just about in reach. I took my own route from 11-12 and caught a few metres back but this was the decisive part of the race. This was when I realised that Tove, Emma and Tatianya were too far clear and extending the lead. It was also when I realised I had dropped Lina or at least could do. It was simple navigating and I just ran as hard as I physically could knowing that if this was the fastest heat then I could still qualify if I came 4th.

Sadly it wasn't to be. Although I came 4th, the first semi final was also fast and the third place from that heat made it through too. My time put me in 10th place though, which is my second highest world cup placing ever. I was really proud of the way I ran the race - I couldn't have done any more. (Swedish TV reply of my semi final, results, GPS)

Friday - Sprint, Finland
This day had been earmarked for me as a key day to simulate WOC as there was a qualification and final on the same day apparently with the same mapper and planner as WOC.

The qualification went without incident. The university houses we started in felt very British so I was at home immediately. I managed to avoid both booby-trap controls were girls got disqualified for missing and I must have got the big route choices correct as I ended up 4th, far higher than I felt the run deserved. It seemed the courses suited the British team well with 6/7 of us qualifying. (results)

The final was not as successful although it was a decent run. I seemingly got the route choice to 3 correct but then I wasted time on the wrong routes and hesitations at 4, 5 and 6. The incident that I remember the most in the course was getting to 10 and not being able to work out if I could jump the crag/wall. If it was a crag then you are allowed to jump it. If it is a wall then you are not. The difference in the lines is a few points of a mm thick. To me, it looked pretty wall-like and I was a little confused. In the end I just jumped it and came to the finish convinced I was going to be disqualified. However, it was a crag and a thinner line and I was ok but just whisked off to my first ever anti-doping test. (Finnish TV, results, GPS) 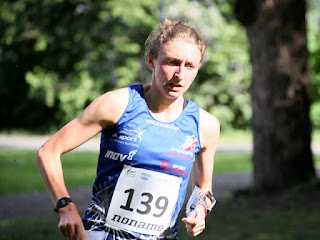 All in all, a good trial run for WOC although I would like to eliminate a few more hesitations in the next month. I also hope that a couple of the odd things about today's race (the printing, the circle cutting, the road crossings and the use of the embargo) will not be issues next month.

Oh, and I was 14th, although I think that should just be assumed by now.

Saturday - Middle, Finland
The final race - the chasing start based on your overall times for the week's qualification races and some bonus seconds for performances in the final. After a reasonable week it was disappointing to be starting right at the back, but that is what happens when you lose 15 minutes on a middle distance and gain a few seconds by sprinting well. I was pretty chilled about it all, just out to enjoy a good map and interesting terrain - and I certainly did see a lot of the map.

I've always been a bit proud of my international performances - I've never done anything special in a forest but I can usually count on myself to do a vaguely sensible run unless you put me in French limestone. I don't know what has changed but for no reason at all I went AWOL on Saturday. Any time I relied on my compass I was so far off it was actually pretty comical. I would love to blame it but I think it might have been user-error. Whatever happened, I am certainly not at all proud of either forest race this week and this is something I fully intended to rectify next time I get a chance. (results, GPS for a giggle)

Summary
So there we go, the last ever Nordic Tour is over. The highlight was the knock out sprint as although it didn't feel like orienteering as I know it, it was just a bit mad and I'm glad to have been part of it. I had been hoping to be in the top 10 more often but I was usually 10 seconds away from it, just the wrong side of the big pack. Things are on track for the World Champs next month but for now it's all about finding those 10 seconds and then losing them.