Training in the Lakes

I feel like I've spent half of February in the Lakes. When I was in the British squad as a junior we used to go there about once a month and have a great weekend of technical orienteering and I think this really helped me. I realised while on a training camp in France last October how rubbish I still am in technical terrain so I thought I would try and go back to the Lakes and relearn to orienteer.

The first camp was a Tess-and-Heather training week tagged on the front of a British squad training day. We did lots of hours and found lots of controls (even if the flags weren't there). We did quite a few sessions head to head and this was really useful. My favourite was on Hurst Wood, with serious contours left after mining works and north lines that were 20 years out of date. Our styles of orienteering are very different so it was good to learn from each other. I wish that the British girls could do more training together in groups as I really push myself physically and technically when training like that. We may not have the funding and organised camps anymore, but I think we should prioritise this. When you look at other national team training camps they have a lot of races and timed exercises. We need to put ourselves under more pressure more often.

That week of training finished with an event on Hutton Roof Crags. This was really interesting terrain with lots of boulders. It didn't matter my legs were knackered as I found the orienteering quite challenging and couldn't go much faster. I was very safe in my orienteering style, I always knew where I was, but I didn't flow or attack the terrain much. I didn't feel like I had raced it. I was 3 minutes down (ish) on Fanni (a very fast Hungarian) and Rachael Elder. This is a big improvement from me last year (e.g. about 30 mins down in France World Cup Race), but I still have a lot to learn in this techinical terrain.

The following weekend was the national cross country championships at Alton Towers. There was loads of mud and it was absolute chaos. The course got shortened about 10 minutes before the gun so we ended up running a flat 6km. I went out much harder than any other race this season and it felt good. I felt strong all the way until the end, and although some people passed me, I generally felt like I climbed a gradually through the field ending up in 40th place - 3 minutes down on the leader. So that's 30 seconds per km. Not that I have any major ambitions in cross country, but I want that gap to be smaller next year. As an extra bonus I was quite a way ahead of the other orienteers who are hoping to run internationally this year. That gives me a lot of confidence going into the orienteering races. I'm a bit disappointed this cross country season is over now, I was just getting started.

The day after that I was back up in the Lakes for a brilliant race on Black Beck and Bouth. It was well worth the trip for a good race on quality terrain. I didn't mess up majorly, but I tried out some new things. I got beaten by Heather by 6 minutes - and I certainly didn't make that many mistakes. Maybe the legs were a bit tired, but its definitely a reminder that I've got to get better at this stuff. To make the most of being up in the nice terrain, we then went out for a cheeky head to head race. Good stuff.


So for the third weekend in a row, I found myself in the Lakes - this time for the Twin Peaks. I was looking forward to doing it all at proper race pace. Sadly in the few days before my foot started to really hurt and I could barely walk on Thursday. I got it checked out by a physio to confirm it was only a bruise, but to be safe I decided to take the bike and give the running a miss for a few days. Shame, but I enjoyed the biking so much that I wasn't too upset. I took in some pretty major climbs. 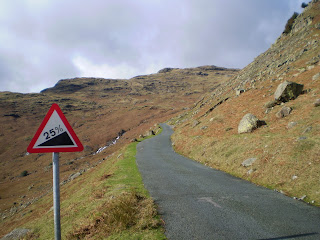 So that was February. March sees a few more UK Cup races, but mainly for me it is my last big month of training. I intend to run myself into the ground and appear in April ready for some faster shorter stuff. I'm already trying to fit in some more sprint related sessions as that is what I really want to do well in this season.
Posted by tess at 21:25 No comments:

My first British senior title. How very exciting - although as Matt Crane (the men's champion) pointed out in a more funny way on his attackpoint training diary - night orienteering is a minority sport within a minority sport. 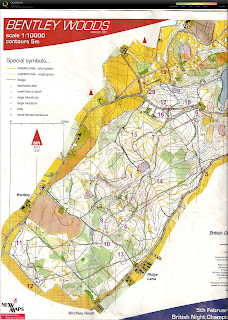 Despite all sorts of pre-race headtorch issues and complete stupidity on my part (forgetting to charge my completely run out battery), everything was resolved by the time I was on the start line.

In general I thought I ran and navigated well. It was not a clean run but I wasn't expecting that at night, and this was probably as good as I could have hoped for. I think what I did well was know where I was within 100m all the time and that meant I could run quite confidently and so fast right up until the control. The exception to this was number 5 where I kept being unsure how far I had gone.

The next morning I ran the Watford half marathon - my main aim for the weekend! My target was 86 minutes. I went out hard (harder than I've been starting a lot of cross country races). I passed 5km in about 20 mins, 10km in about 40 and the half way in just over 43. So thats quite a lot of PB times being set. The legs felt good and I thought I was keeping up a steady speed but every since about 4 miles I had been overtaken by about 10 people per mile. By 8 miles I had had enough. I thought I must have slowed down a lot. I started doubting whether I would even break 90, and this got me very angry. I kept plugging away and finally we passed the 12 mile sign. The finish was in sight (we had to do a loop of the park) and I suddenly realised that 86 was realistic again. I crossed the line in 86.35 - fantastic. That means the second half was also 43 - so I should never have doubted myself. I was 4th lady, but as my very talented and very modest Highgate team mate Becky Penty ran 76 ish, we won the team prize.

Altogether a very successful weekend, though mostly because it has confirmed what I had thought in training so far - I am fitter than I was before, and I am navigating better and more confidently than before. Now the trick is not to peak too early and to try and keep this going until the bigger races in April and May, and ultimately the World Champs in August. Also, got to keep things in perspective. A Swiss runner who didn't make the WOC team in 2010 ran 80 for a half in the Autumn, and Minna Kauppi seems to be running 3 min/kms in her track sessions. Long road ahead.