A big weekend indeed. When two orienteering races in one weekend aren’t enough, why not throw in a hill racing debut as well?
Saturday was a relatively early start. Off up to Fife for the Devil’s Burden Hill Relays. I’ve never really done hill running as a proper sport before, as being a southerner I’ve never been involved in a club or had any local races to do. I was also making my debut for HBT – the brown club that I hope will be my second claim/Scottish club (whatever the rules require). I was put on the first leg of the Wreckage team with Stewart Caithness, also an orienteer. I was a bit nervous as I wasn’t sure how to pace it – I’m used to training pace or orienteering race speed. I’m also rubbish at descending.
The gun went and people sprinted off. Stewart and I settled into a comfortable pace and plodded up the hill. The race route went straight up the big hill, off the top, then nice gentle descending for the rest of the race. I think it was about 7km in total. I felt good up the hill, especially on the steeper bits where others were walking. We punched the first checkpoint at the top and the Stewart flew done a pretty steep hillside. I gradually got more confident the further down I got and the flatter it became and finally I caught him up again. We then ran together for the rest of the race, quite nicely matched pace wise. We finished as the first HBT team – even beating the men – which was fun. After a quick warm down we had to drive to pick up Murray and James who had run the second leg for the men’s team and pretty much ran it faster than we drove. Murray set a very fast time, maybe a record, for second leg and James’ team won overall. So the 4 of us set off pretty happy back down to Edinburgh for the next race.
I’d never done the Edinburgh City Race before, and although I have spent a bit of time in Edinburgh, I definitely don’t know it well. I deliberately haven’t gone training on any sprint maps when I’ve been up recently nor did I look at maps before as I wanted to have it all new for the race. There had been a lot of hype about excellent courses this year and it didn’t let me down. The first 9 controls were so tricky to do at speed that I was barely even jogging. I got the wrong side of the fence at 8. The first time I really got to stretch the legs and plan ahead was going to 10. I then went down the wrong alleyway, punched the wrong control, worked out I was near 11 and so had to go back to 10. The next few legs got me moving a bit quicker, but not after I’d spent a while deciding my routes. I’m pretty happy with most that I took but I could have been better on 12 and avoiding the climb staying on the lower road out of 11. I managed to slow back down and get 17-18-19 ok and pick my way to the finish. It was a mental test all the way – shown by the fact my heart rate only reached “racing zone” for 3 of the 56 minutes I was out. I felt physically great out there, no evidence of a hill race in the legs, although I think the planner should take most of the credit for that, keeping me at such a slow pace with so much thinking to do. I ended up 2nd, 8 seconds behind Helen Bridle with a similar gap to Claire Ward in 3rd. (Results here) Very pleased with that run. Topped Saturday off with fish and chips and Burn’s night Ceilidh dancing – good times.
Sunday was a race around Arthur’s Seat. Again, I don’t know it well, although I had run there but not orienteering. I ran the 7.9km brown. I ran ok, not much time loss and finished in 65 minutes. That felt a bit slow but there was 500m-ish of climb and my legs did not feel fresh up the hills. I was pretty pleased with that, and very pleased overall with the weekend.
(Extra note - I paid for it on Monday).
Posted by tess at 20:03 3 comments: 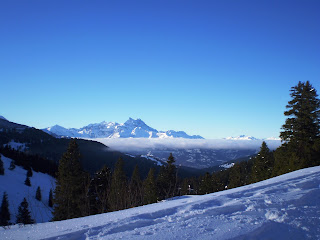 There were a couple of reasons why I had a great start to 2011. The first being that I woke up on 1st January in a Swiss alpine ski village and went for a 22km run. I was staying with an old school friend who is now a ski instructor so I had 3 days of snowy fun reminding myself how to cross country ski again. I loved it. More photos are here.

Another reason is that my orienteering is going well. I finished 2010 in a bit of a boo with the sport and I kept making a mess of finding the controls. On January 16th ,I ran in the Compass Sport Cup qualifier for Harlequins - keen to make it 3 years in a row in the final. I know Sutton Park fairly well after a few years in Birmingham and having planned the Peter Palmer Relays there in 2006-ish. It's always trickier than you think. The gorse bushes are really fast to run around but really easy to confuse. The forest areas can be quite slow to run through and impossible to find the pits in. 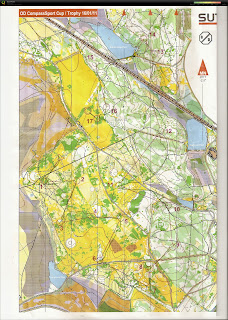 The picture shows my route - I didn't really miss too much. The route to 12 /13 is wrong - I couldn't quite match up all the points. I just ran down the path and straight into 12. Kept going down the reentrant to the path and took the smaller path to the right on the edge of the OOB. Then it pretty much picks up the GPS trace again. I lost time a little bit at 4 and 8. I was a bit slow and hesitant going to 14 and I made a mess coming out. It doesn't look too bad on the trace but I ran a few metres right down the track before doubling back. I probably could have been more ambitious to 15 and take the straighter line in, but I wanted to be safe. Small mess coming out of 16, but I really am being picky. I was very happy with my run and time, winning ahead of Finnish world champs team member Riina Kuuselo. Results are here. Harlequins made it through to the final in October.

A final, probably connected reason, why 2011 has been great is that I've put together a really good month of training. I got ill in late December but I've picked up well and am feeling fitter and faster. It has meant I've been absolutely knackered but I'm looking forward to posting a good time at the Watford Half Marathon in February and racing hard at the Southern Cross Country Champs at the end of January. My time-lagged training diary is here.
Posted by tess at 19:52 No comments: