Last weekend I went on a crazy Italian sprint race tour. With a Park World Tour event around the streets of San Marino followed by the annual Venice race, I wasn’t too upset about missing the GB squad planning weekend in the North York moors!
We started off in San Marino running a fairly standard easy course around a steep forest park just outside the main city. I was really pleased with how this race went – probably because I got a minute to look at the map in the start lane, so I had good plans for all controls! The terrain was a bit rough at times both underfoot and bushes, but in other places it was pretty clear. I was a bit lucky finding the tree at number 9 as it was very hidden and the map was a vague resemblance of the ground (I went back afterwards to check it was as mad as first thought!). I was second, about half a minute behind Czech international Sarka Svobodna. I was dead pleased with that.
After a teaser night event around the lower streets of San Marino city we had the real race on the Saturday. It turned out not to be a Park World Tour race, but that didn’t affect my enjoyment. The views from the warm up area were brilliant and I was buzzing before I even started. Again I got a minute in the start lane to look at the map. I got a bit stuck by number 1 as I didn’t understand the control description. I realised it was on the underpass bit, but the description made it seem like the outside – especially when I saw how number 3 was described. So I wasted about 45 seconds there and in hindsight I should have realised that if it was on the outside then the description would have been building. But after that I really got going. Sarka caught me by a minute by number 5, though she got most of that on the first control and then just reeled me in. We had a great head to head race for most of the course as there were a lot of route choice options – or at least it took ages to find a route, let alone the best one. I finished nicely ahead of her but she still got the win by about 30 seconds. 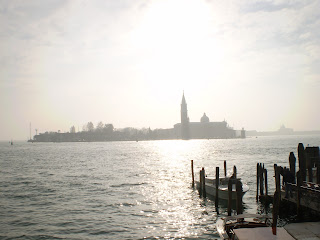 The grand finale of the weekend was the Venice street race. This had been on the list of “must-do” events for quite a while and it certainly lived up to expectations. 74 minutes of concentration, tourist dodging, bridge jumping, head on collisions...fantastic. I was very nearly late to the start and when I picked up the map I just went “wow”. I stopped for a bit at the start to get a good route and then jogged off, slowly winding up the speed. I still took a wrong alley in my first decision of the race! I definitely got into things more and overall I was pleased with my performance. I ran down the very occasional dead end, but not wasting too much time. I thought my routes were good, but once I had chosen I didn’t look for others, so I could well have lost time there. I ended up about 5 minutes down. I think 2 could be accounted for by my slow start as I felt I really got going by the end.  Maybe there were a few missed route choices or maybe my speed wasn’t fast enough.  My GPS said I ran 14.7km for the 8.7km course. I definitely felt it in the legs the next day - it was a full workout as always changing direction, going up stairs over bridges and jumping down the other side. It totally lived up to expectations, as did the whole weekend.
Posted by tess at 08:33 No comments:

On the first weekend in November I ran for English in the Senior Home International match between all the home nations. I’d run this twice as a junior (and won both times!) but never as senior. Scotland had won the team prize overall for a few years in a row, so it was time for us to return the trophy to its rightful home. 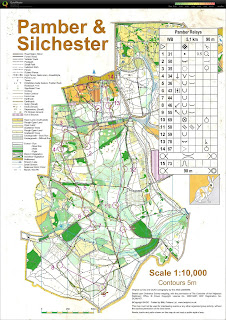 It was almost on home terrain for me, with the relays being just by Basingstoke and the individuals in the New Forest, but I hadn’t run on either area before. I was running second leg in the England 3rd team. Being really honest, I had hoped to be in a higher team based on the season’s results, but I know from past experience not to get too worried over England team selections. Alice Butt ran first leg and didn’t have the best of times, so I went out a long way behind the leaders. I was hoping to run through a load of teams but it was a bit lonely in the forest. I was quite pleased with my run. I attacked hard because the running was very easy. The controls weren’t always the easiest to find, partly as they were a little hidden on random features and partly because the map and I weren’t always in agreement. My garmin seems to agree that I might have had problems at number 9. I ran about 35 mins for my leg (the 4th fastest time of the day). The fastest were 32-33, so I was a bit off the pace, though I think more faffing than running wise. Karen Poole went out and ran a strong last leg to pull us back in a very respectable team position. 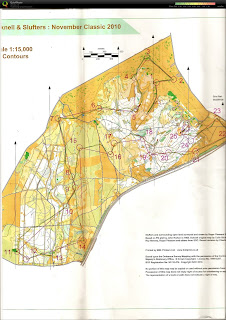 The individual day was not as good. It started pretty badly as I did a nice 180 out of the start. Ran for 1 min wondering why things weren’t matching even though my compass was lined up before I realised I was upside down. I then ran well until control number 5 where I had counted off lots of bits of vegetation thinking I had understood the liberal mapping style, but lost all nerve at the last minute. Result was a large amount of muppetry before actually finding the flag. I ran the next lot ok, no major problems and stretching the legs out on the running sections. I went for the head-up tactic on the open areas as you were bound to see someone go into the control. 11 and 12 were more tricky in the actual location of the flag not necessarily the control site. At 16 I got a bit sloppy with the compass. At 18 I forgot that I was going into woodland and so needed to take the speed down a bit and I crashed on, wasting a bit of time, but eventually finding the control. At 19 I’ve no idea what happened, but I similar 180 ish error happened. Lost a lot of time there. From there it was just about getting home safely and that I managed though I saw Hollie Orr not far behind me. I wasn’t very happy with my run and expected to be thoroughly whipped but I surprised to be “only” 5 minutes down given my outing - and 5th! But I think everyone had problems in one or other place finding some the more hidden controls.
Great news was that England took back the overall trophy. It was a nice weekend, but a shame that we weren’t using some better areas given it’s a high level competition. It was also a shame that the relays weren’t attached to another event to give more atmosphere and spectators. Though I should thank the organisers, particularly on the relay day, as it seemed very few people put a lot of work in to make the event happen.
Posted by tess at 21:13 No comments: