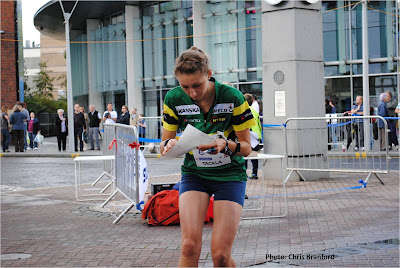 This weekend I travelled to Perth to compete in the Park World Tour. I had so nearly pulled out on several occasions in the two weeks leading up to it, but managed to persuade myself onto the long train ride up. I was nervous that I was in bad shape and so had done 4 intervals sessions in the previous 10 days as an emergency get fit quick plan. I couldn’t decide whether I was feeling fast, so I decided to decide I was.

The first race was qualification. The 15 international invited athletes were automatically through, so it was for the rest of us to fight for another 15 places in the final. The British elite turnout was not high, and so I was fairly confident of making the final – provided I didn’t mispunch.  I won’t write much about the qualification race at Scone, except I never really got in my stride and missed lots. Was an interesting course, but I didn’t do it very well. But I made it through to the final. The best bit of the day was running around the maze head to head with Cat Taylor. She led all the way with superior control flow, but then lost it all on the last one and I cruised to an easy victory!

The final was the important one. It was around the streets of Perth where the challenges would be crowds and finding alleyways. I had got the impression that the planner enjoyed control picks so I didn’t expect long route choices, but lots of little tricks. The two things I wanted to focus on in the race were control flow and smoothness through the course and concentration all the way till the finish line. 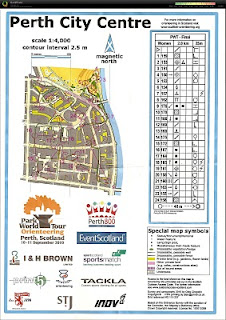 Well. I mispunched. I missed out number 17. I went straight to 18. So I guess I failed.

But after the initial anger, I was actually really happy. I had had a nearly perfect race (by my standards). I had been fluent through the controls, I had looked ahead, planned my exits before I was at the controls. I spotted little tricks early. I ran at a speed which felt comfortable but controlled. I kept my concentration through the last loop. Looking at split times, I might have been heading for a more than good result.

So the question is, why didn’t I realise I’d missed a control? I’m not sure. Usually there are big alarm bells going when I’m about to do something stupid, and I tend to ignore them. This time there was nothing. I think that I had looked ahead at the leg 16-17 on an earlier bit of dead running and had decided that I needed to come out left as it would be easier to find the route in than the alleyways on the crowded street. I had realised there were no tricks to block the control, so I didn’t look any more at it and kept focus on the current leg. When I got to 16, I ran up to the main road, looked at the map and navigated to 18. It fitted my plan, along the road, down the alleyway, nothing complicated - so I never noticed. 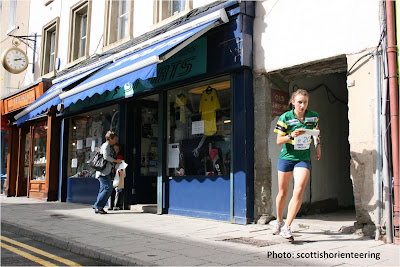 So how do I stop this happening again? It couldn’t have been that perfect a run if I didn’t do the basic thing of finding all the controls. At some point there must have been a lapse where it all went wrong. At the moment, I’m not sure when that was. GB coach Toni is full of interesting advice and quite often it comes back to the bigger picture of the terrain. He had some helpful hints, but that’s his advice to share not mine.

After a great ceilidh on Saturday night, I ran a long course at Devilla. I felt slow and sloppy in the first half (maybe attributed to lively dancing and lack of sleep) but I picked up towards the end. It was a really great weekend. I hope it’s  not long until the next PWT in Scotland.
Posted by tess at 20:50 3 comments: