Well November has been/is still a very busy month so there has been little blogging. But there has still been lots of training so that is good. Things are going to plan and I rarely have to skip a session (though the swineflu vaccine did knock me for six). I ran a personal best on 3000m (11.17, previous best 11.57!) though it was on an indoor track of a bit over 200m with raised corners and random holes in places so I don't think I'll say its an official time. But I'm feeling in great shape and it's an awesome starting point for training over the winter. 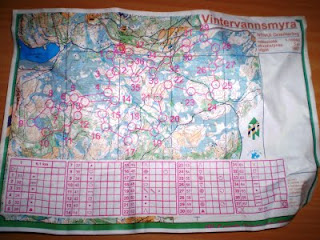 The snow that came in September has completely disappeared and its looking like we could even be snow free until Christmas. That would make me very happy. Sadly, I'm working too hard and not seeing daylight during the week so my only chance to orienteer is the weekends (I just get lost if I try it at night). 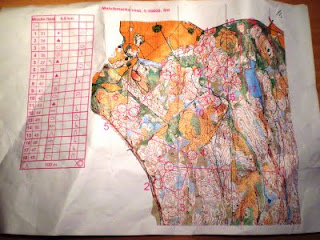 Here are some maps of the last 2 weekends. The middle at Malvikmarka was very cool until half the forest was felled from about 7 onwards. But I felt like I was running well and smoothly through controls. The control pick at Vintervannsmyra was awesome, but I got blisters (I was running for about 50mins before I started) and it was just unbearable by the time I got to 21. But still great fun, and I'll do the second half another time.
Posted by tess at 17:31 No comments: